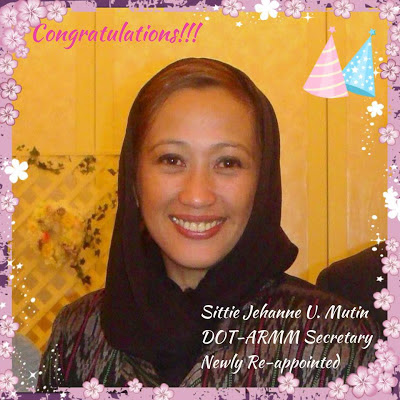 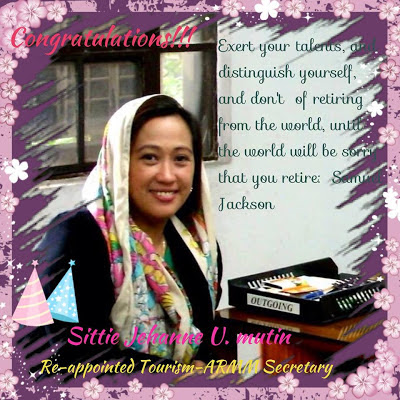 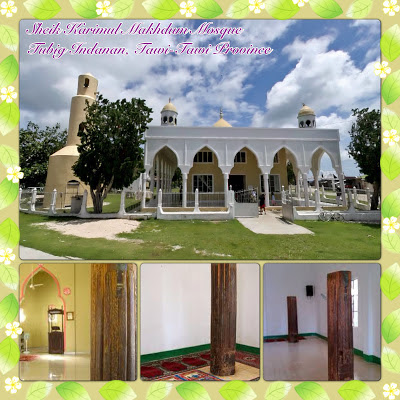 President Aquino has declared the Sheikh Karimul Makhdum Mosque in Tawi-Tawi as a national historical landmark, being the oldest Muslim house of prayer in the country.
The President, in signing Republic Act No. 10573 last May 24, cited that it is the constitutional mandate of the government to conserve, promote and popularize the nation’s historical and cultural heritage like the Sheikh Karimul Makhdum Mosque which is located at Tubig Indangan Simunul in Tawi-Tawi.

The Mosque was constructed in 1380 A.D. and considered as one of the oldest Muslim House of Prayer or Mosques in the Philippines.

The new law aims to underscore the contribution of the Islamic faith to the enrichment, vibrance and diversity of the Philippines’ culture and civilization.

It also directs the National Historical Commission of the Philippines (NHCP) to oversee and supervise the preservation of the Mosque; organize and undertake a national fund campaign for the purpose of raising funds from private sources to be used for the preservation and rehabilitation of the shrine; include in the Commission’s program the operationalization of the Mosque and eventually its needed funding in the annual General Appropriations Act; and draw up the implementing rules and regulations of the new Act. (JOCELYN MONTEMAYOR/30 May 2013) 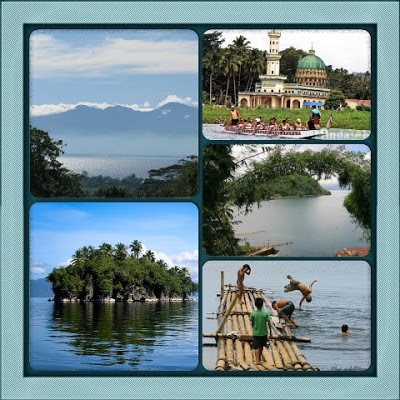 How the Angels Built Lake Lanao

Long ago there was no lake in Lanao.  On the place where it is now situated, there flourished a mighty sultanate called Mantapoli.  During the reign of Sultan Abdara Radawi, the greater grandfather of Radia Indarapatra (mythological hero of the Lanao Muslims), this realm expanded by military conquests and by dynastic marriages so that in time its fame spread far and wide.

The population of Mantapoli was numerous and fast increasing.  At that time the world was divided into two regions: Sebangan (East) and Sedpan (West).   The mighty sultanate of Mantapoli belonged to Sebangan.  Because this sultanate rapidly increased in power and population as well, the equilibrium between Sebangan and Sedpan was broken.

This dis-equilibrium soon came to the attention of Archangel Diabarail (Gabriel to the Christians).  Like a flash of sunlight, Diabarail flew to the Eighth heaven and told Allah, "My Lord, why have you permitted the unbalance of the earth?   Because of the power of Mantapoli, Sebangan is now larger than Sedpan."
"Why, Diabarail," replied the Sohara (Voice of Allah), "what is wrong with that?"
"My Lord, Mantapoli has a vast population countless as the particles of dust.  If we will allow this sultanate to remain in Sebangan, I fear that the world would turn upside down, since Sebangan is heavier than Sedpan."
"Your words show great wisdom, Diabarail," commented the Sohara.
"What must we do, my Lord, to avert the impending catastrophe?"

Upon receiving the mandate of Allah, Archangel Diabarail, traveling faster than lightning, rallied the millions of angels from the Seven-Regions-Beneath-the-Earth and the Seven-Regions-in-the-Sky.  With this formidable army, he presented himself to Allah, saying, "My Lord, we are ready to obey Your command."
The Sohara spoke, "Go to Sebangan, and lift the land of Mantapoli."

Diabarail, leading his army of angels, flew to the east.  In the twinkle of an eye, the sun vanished and a terrible darkness as black as the blackest velvet shrouded the universe.  The angels sped faster than arrows.  They swooped on Mantapoli, lifting it with great care and carried it (including its people, houses, crops and animals) through the air as if it were a carpet.  They brought it down at the center of the earth, in accordance with the command of Allah.  The very spot vacated by the sultanate of Mantapoli became a huge basin of deep, blue water-the present Lanao Lake.

The waters coming from the deep bowels of the earth rose higher and higher.  Archangel Diabarail, seeing the rising tides immediately returned to the Eighth Heaven and reported to Allah, "My Lord, the earth is now balanced.  But the place where we removed Mantapoli is becoming an ocean.  The waters are rising fast, and unless an outlet for them can be found, I fear that they might inundate Sebangan and drown all Your people." (SEAsite)
In response, the Sohara said, "You are right, Diabarail.  Go out, then, and summon the Four Winds of the World: Angin Taupan, Angin Besar, Angin Darat, and Angin Sarsar.  Tell them to blow and make an outlet for the overflowing waters."

Obeying the Master's command, the faithful messenger summoned the Four Winds.  "By the Will of Allah," he told them, "blow your best, and make an outlet for the rising waters of the new lake."
The four winds of the world blew, and turbulence swept the whole eastern half of the earth.  The surging waters rolled swiftly towards the shores of Tilok Bay to the southeastern direction.  But the towering ranges impeded their onrush.   The Four Winds blew, hurling the waves against the rocky slopes but in vain; no outlet could be cut through the mountain barrier.

Changing direction, this time eastward, the Four Winds blew harder driving the raging waters towards the shores of Sugud Bay (situated east of Dansalan, now Marawi City).  Once again, the attempt to create an outlet failed because the bay was too far from the sea.
For the third time, the Four Winds changed direction and blew their hardest.  The waves, plunging with ferocity, rolled towards Marawi.  Day and night, the Winds blew as the waters lashed against the shoreline of Marawi.  This time the attempt succeeded.  An outlet now called Agus River was made, and through the outlet, that water of Lake Lanao poured out to the sea, thereby saving Sebangan from a deluge.
It came to past that there was a high cliff at the outlet, and over the cliff the waters cascaded in majestic volume.  Thus, arose the beautiful falls which, aeons later, was named Maria Cristina, after a famous queen of Spain. 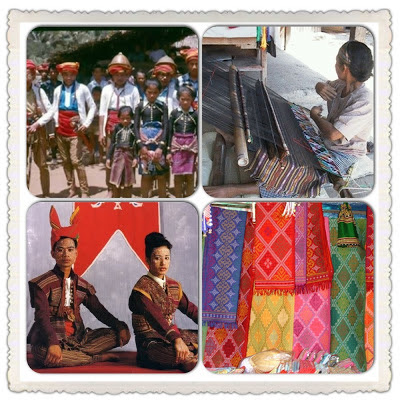 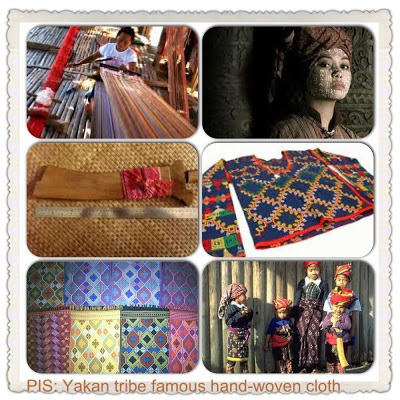 The southernmost major island group of the Philippines, Mindanao, is home to several tribes.  One of these is the Yakan tribe, which lives on the hillsides of the island of Basilan. The Yakan is a horse-riding hill tribe and is one of the major indigenous tribes in Mindanao.  The Yakan is considered one of the 13 Moro groups in the Philippines.

The Yakans traditionally wear colorful, hand-woven clothes.  Yakan weaving has become very popular in the Philippines.  The Yakans turn the pineapple and abaca into fibers, which they use as their basic weaving material. Herbal extracts from leaves, roots and barks are used to dye the fibers which they weave into tapestries filled with intricate designs.

Yakan women are excellent weavers, and are famous for their beautifully woven traditional costumes of cotton and pineapple cloth. The basic garment for men and women consists of a tight-fitting upper garment with tight-fitting trousers called sawal. The shirt is open in front from lapel down to the waist, using up to 40 sequined or golden buttons. To close the shirt, a long string is crisscrossed from one button to the other so that when tightly drawn, the shirt closes from top to bottom. Usually the shirt remains open since the string is often lost. Over the shirt, male and female wear a tight-fitting jacket, which is exquisitely embroidered in the front and back, with cuffs decorated with multicolored sequins.

The difference in male and female apparel lies in accessories. Men wear hand woven pis (head cloth) and a 15m-long kandit (belt or sash) made of red cloth called gilim. The pis serves as "protection" from spears and knives during combat, and may be fastened around the trousers. The women wear a short skirt over the trousers, around which a rectangular, hand woven cloth is tied. This cloth is the most expensive part of their costume because it is woven in a tedious manner. Men and women wear the saruk, the Yakan hat worn to make one look more attractive and elegant. Some wear the hat over the turban and use it as a purse for betel nuts, tobacco, and money. Yakan warriors wear a bulletproof shirt prepared by hadjis and imams who write Arabic script all over the shirt (Sherfan 1976:160, 205-207).

Ornaments such as necklaces may be worn as charms. A crocodile tooth polished with a hole at the base is believed to bring good luck when worn as a necklace. The Yakan also wear amulets against bullets. These contain unreadable symbols, are wrapped in black cloth, sewn in triangular form, and tied around the neck. Belts made of snake bones are strung together to protect them against bodily pain. One charm that protects them from sicknesses due to evil spirits is the manik tegiyas - a necklace or bracelet made of the fruits of a flower beaded together. The manik sembulan is made of a bamboo stem cut into short pieces, strung together either as a necklace or bracelet, and serving as added protection against sickness inflicted by evil spirits. To gain more strength against evil spirits, men and women wear the anting-anting. This consists of a string with a piece of cloth containing beads as pendant (Sherfan 1976:143-147).