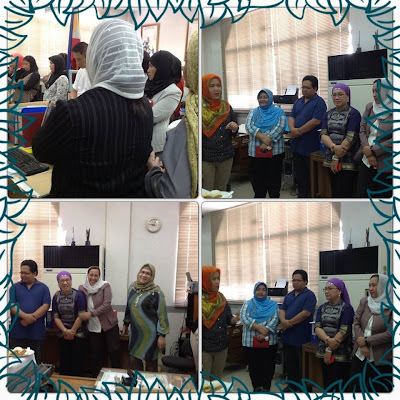 Leadership turnover between outgoing DOT-ARMM Secretary Sittie Jehanne U. Mutin and incoming Secretary, Engr. Maritess K. Maguindra in the presence of ARMM Executive Secretary Atty. Laisa Masuhud Alamia, guests and DOT Personnel lead Asst. Secretary Bai Shalimar A. Candao.... WELCOME Secretary Maguindra to the DOT family and THANK YOU Secretary Mutin for working with us with all your heart and soul....Let us spread hard work, positive vibes and sincerity in promoting tourism to the world.... 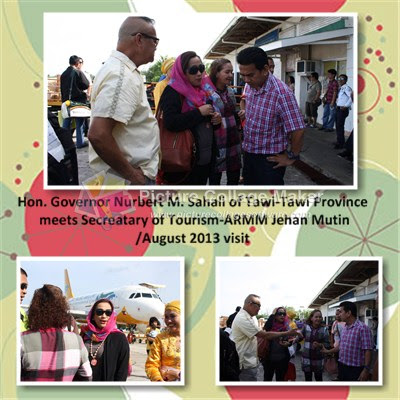 Tawi-Tawi Province: One of the stops of DOT-ARMM Secretary Sittie Jehanne U. Mutin visits to the different tourism sites in the ARMM while she is promoting Discover Surprising Muslim Mindanao....
No comments: 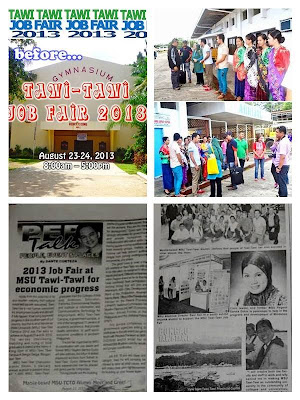 TAWI-TAWI, Philippines - The Department of Tourism-ARMM joins the Tawi-Tawi first ever job fair happening this Friday and Saturday August 23 to 24, 2013 at MSU-TCTO Gymnasium. Regional Secretary Mutin now in Tawi-Tawi for incoming tourism development project said tourism in the region will expand sustainable community driven tourism development through collaborative partnerships with local government units, Provincial and Municipal Tourism Councils as well as relevant private companies. The companies that will be participating in this job fair include: Ayala Corporation; Nurusalam; ARMM Regional Office; DBP; Unifrutti; ABS-CBN Zamboanga; Armed Forces of the Philippines; Department of Labor and Employment ARMM; Office of the Presidential Adviser on the Peace Process; National Commission on Muslim Filipinos; Amanah Islamic Bank; Philippine National Police; PRO-ARMM; Zenar Telecoms; Synerteam Recruitment and Deployment Services; and Philippine Military Academy and Assemblywoman Samira Gutoc –Tomawis who initiated this event, also now in Tawi-Tawi said priority are given t professionals and skilled women in the region. People of the islands deserve this job fair opportunity because they are farthest from access to financial and political capital. In this event more exciting activities awaits applicants. Fun freebies will be given away and there will also be exclusive career talks, Gutoc add.  (Thanks to Basil Villacorte Sali for the pictures). God bless people in Tawi-Tawi. (John De Peralta Ponce/DOT-ARMM)
No comments:

66th Foundation Anniversary Celebration of the Municipality of Parang, Maguindanao 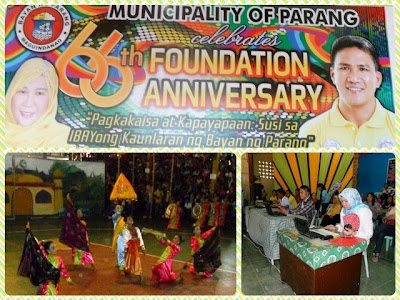 66th Foundation Anniversary Celebration
of the Municipality of Parang, Maguindanao

One of the lined-up activities for the week-long celebration of the 66th Foundation Anniversary of Parang, Maguindanao with the theme “Pagkakaisa at Kapayapaan: Susi sa Ibayong Kaunlaran sa Bayan ng Parang” under the able leadership  of Mayor Ibrahim P. Ibay, DMD was the Inter-School Cultural Dance Contest held on August 17, 2013 at Notre Dame of Parang.  Six (6) participating schools from Parang, Maguindanao participated in to the said contest wherein hailed as champion was the Punta Central Elementary School where they featured the traditional Muslim Royalty dance called the “Singkil”.  Chairman of the Board of judges was DOT-ARMM Asec. Bai Shalimar Candao.(Ysnairin Y. Sula/DOT-ARMM)
No comments: 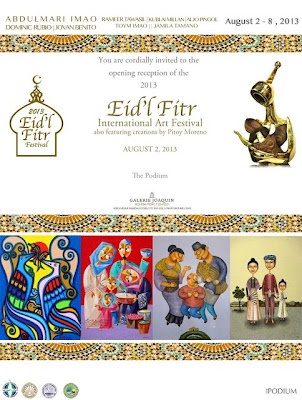 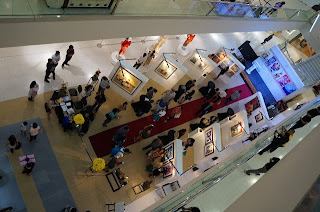 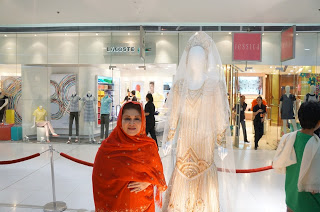 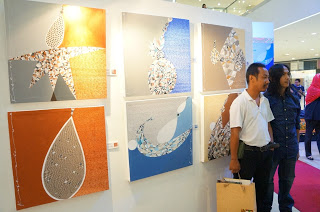 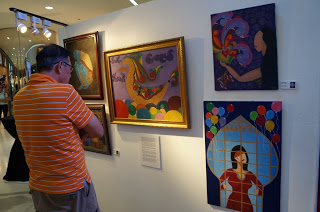 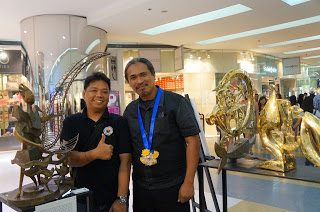 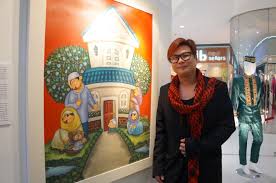 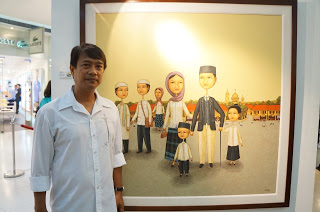 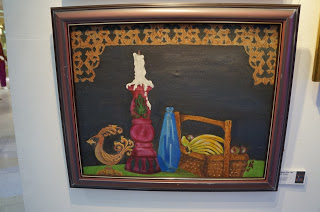 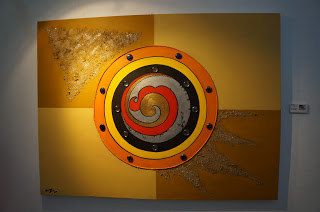 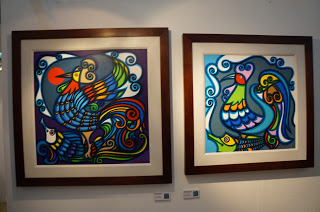 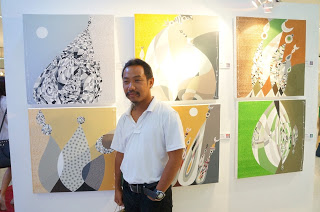 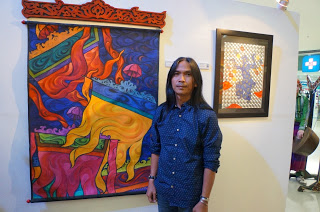 Here's the press release from the Department of Tourism (DOT) Tourism Promotions Board and an invite for Wazzup Pilipinas to join the presscon at the 5th floor CCA Market Cafe of the Podium and to witness the opening of an Eid'l Fitr art exhibit at 2nd level of the same mall to last from August 2 to 8, plus along with this is an invite to also attend the celebrations from August 9 to 11 at the Atrium of the Block at SM North EDSA.

Wazzup Pilipinas has already attended the presscon and art exhibit opening (highlights of the event will be posted soon here) and is excited to also attend the celebration on August 9 to 11. I'm sure this will be one grand event organized in celebration of Eid'l Fitr and to promote tourism in the country by attracting foreign and kababayan visitors to come visit the Philippines during these times.
Eid'ls More Fun in the Philippines!

The Department of Tourism (DOT) and the Tourism Promotions Board (TPB) have stepped up support for this year’s Eid’l Fitr celebrations from 9-11 August 2013 at the Atrium/The Block of SM North, Quezon City and in other areas of the country.

An Art Exhibit is also scheduled from 2-8 August 2013 at the Podium, Mandaluyong City to kick start the Festival with works of world-renowned craftsmen led by Abdulmari Imao and fashion creations by Pitoy Moreno.
Eid’l Fitr (also known as Eid-al-Fitr, Id-Ul-Fitr, Eid) is the first day of the Islamic month of Shawwal signaling the end of Ramadan, the month of fasting and prayer. Eid literally means festivity and after a month-long sacrifice, Eid’l Fitr (festival of fast-breaking) is looked forward to as a period of merriment, sharing, and forgiveness.

In 2002, the Eid’l Fitr was recognized as a national holiday by the government, making the Philippines the first predominantly Christian country worldwide to have done so. The proclamation was enacted to promote peace and harmony among all major religions in the country.

“The DOT is one with our Muslim brothers and sisters in this year’s celebration of Eid’l Fitr. As in the past, our participation is a constant recognition of the close affinity with the Muslim community and deep appreciation of our cultural diversity that lends more beauty to our country. The Eid’l Fitr celebration provides opportunities to showcase the best of Muslim culture and traditions, as well as enable guests and even strangers to experience the practice of thanksgiving and sharing. The Bangsamoro Framework Agreement, a milestone achievement forged under President Aquino’s administration, is one among the many reasons why this year’s celebration is more meaningful,” DOT Secretary Ramon R. Jimenez, Jr. said.

The DOT has rallied various tourism-oriented establishments to support the festival. Among the mall chains with sale and activities are SM (Bicutan, Quiapo, Davao, Lanang, GenSan), Robinsons (Robinsons Place and Starmills in Pampanga) and Ayala (Glorietta 2 in Makati City, Trinoma in Quezon City and Market! Market! in Taguig City). On the other hand, restaurants offering Halal food are the following Hotel and Restaurant Association of the Philippines (HRAP) members: Bacolod Chicken Inasal in Greenhills, Coffee Shop of Bayview Park Hotel, Café in the Park of Century Park Hotel, Riviera Café of Heritage Hotel, Market Café of Hyatt Regency Hotel and Casino and Circles of Makati Shangri-La.

The TPB, as the marketing arm of the DOT, intends to institutionalize annual support to the Eid. TPB Chief Operating Officer Domingo Ramon C. Enerio III said, “Festival support is just one aspect. What is more important is capacitating local government and communities to enhance existing and develop new tourism products. Our industry is likewise excited by the prospects of a peaceful Mindanao. Our brand campaign will ring truer as this unfolds.”
“We are thankful for the support of these establishments who have responded to our call for participation. The success of Eid’l Fitr is also a testament to the government and people support for the peace process towards the sustainable development of Mindanao. Tourism is a vehicle to achieve inclusive growth and Mindanao can very well capitalize on its rich natural and cultural resources. We enjoin every Filipino to take an active role in making the entire country a peaceful, more fun, and must-experience destination in Asia,” Secretary Jimenez added.(Posted by: Pinoy Tekkie on August 2, 2013 in the Official Pilipinas Blog:  Wazzup Pilipinas!)