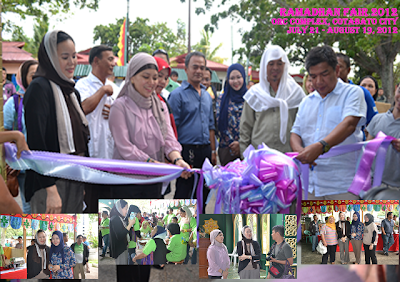 Ramadhan Fair 2012
COTABATO CITY. — The Autonomous Region for Muslim Mindanao welcome the first day of Ramadan by holding a one month- Ramadan Fair 2012. The theme is “Ang Panlipunang Pagbabago ay Nagsisimula sa Pagdalisay sa Sarili. Local traders and entrepreneurs, ARMM line agencies put up booths to sell and showcase ARMM’s rich products.
No less than ARMM Mujib Hataman and his wife National Commission on Muslim Filipinos Exec. Director Sittie Djalia Hataman leads the opening and cutting of ribbon. Also present are Regional Legislative Assembly Speaker Rasul. Mitmug, DILG Sec. Haroun Al Rashid Lucman, Tourism Sec. Nassreena S. Badiri, religious, business and government sectors.
In his speech, Hataman said they will continue genuine reforms in ARMM. “We will be implementing more reforms. Preserved our culture and tourism” he said.
The event then took a turn for the insanely fun part, free food and drinks to all,
The holy month of Ramadan, the ninth month of the Muslim (Hijrah) calendar, is the time for Muslims to fast from dawn to dusk.
Muslims abstain from eating, drinking, backbiting, doing indecent gestures, committing any sins, and even engaging in sexual intercourse to sympathize with the poor who suffer from hunger, and to commune in peace with their Almighty Creator.
President Benigno Aquino III on Monday lauded Autonomous Region of Muslim Mindanao officer in charge Governor Mujiv Hataman for being a “certified ghost buster.”
In his third state of the nation address before the joint session of both houses of Congress at the House of Representatives, Aquino said that before Hataman took office, ghost projects were rampant in the ARMM.
“Before our reforms in the ARMM began, what we had were ghost students walking to ghost schools on ghost roads, to learn from ghost teachers. Some of the apparitions that haunted OIC Governor Mujiv Hataman: Four schools found with ghost students; we are also investigating the teachers whose names do not appear in the list of the Professional Regulation Commission, as well as the government workers not listed in the plantilla,” Aquino said.
He added that since Hataman’s term, 55 ghost entries have been taken off the payroll and projects like re-graveling of roads repeatedly as some sort of fund raising program by local executives have also been outlawed. Likewise, the government also ended cash advances for agencies in the region. (By AYO GUNTING 25 July 2012)